How to Shoot Longer Exposures During Daylight

What do you think of shots of waterfalls, or of water in the ocean where it appears to be very soft,  out of focus and smooth?  Some people love them, a some people hate them and think they're over-used.   I'm somewhere in the middle but to me there's no denying that they can be more interesting when used for the proper shot.  Sometimes the silky smooth appearance of moving water against the contrasting sharp elements of other objects in the photo can be interesting.  Here is how I accomplish this.

First, since you are going to be using a longer exposure, generally anywhere from 1/2 second to 30 seconds, you'll need a sturdy tripod.  But how do you shoot at such a long exposure in daylight, without overexposing the image?  There are a few thing you can do to force a longer exposure or shutter speed. First you must take your camera out of AUTO Mode.  AUTO mode chooses the camera's setting automatically for you.  You must instead choose one of the "Creative" modes - I use Aperture Priority but I sometimes use Manual as well.   Next I choose the lowest setting for ISO for my camera.  This is ISO 100 for the Canon line.  ISO is the "sensitivity" for the camera's sensor, similar to what ASA was for film.  The higher the number, the more sensitive the sensor will be to light and the lower light you can shoot in.  So, the LOWER the ISO number, the less sensitive the sensor will be to light, and the longer the shutter speed will be.  Of course, this will not be nearly enough.  Next, you should choose a smaller aperture for the lens you're using.  I usually start out with f/16 or f/18.  A smaller aperture will limit the light reaching the sensor, and force a longer shutter speed.  In very low light, such as pre-dawn or at sunset, this "may" be enough to slow your shutter speed to 1/2 second and get the effect your looking for.  But what if it's not?  In this case, you can use a Neutral Density filter to screw onto your lens.  This filter limits the amount of light reaching the sensor.  They come in varying degrees of "darkness"  or "stops".  "Stops" refers to f-stops or aperture settings for your camera.  If you buy a 4 stop neutral density filter, this means you will either need to manually select an f-stop that is four stops wider (lets in more light) or choose a slower shutter speed by four stops, in order to properly expose you image.  Obviously you're interested in using a slower shutter speed in this case.   BTW, if you buy a neutral density filter, they come in many brands - I have Hoya filters, but make sure you buy a decent one, and one that will FIT your lens - they come in different diameters.  They just screw on your lens.

When shooting a longer exposure on your camera, it's important to avoid ANY camera shake or movement during the exposure.  That's why it's necessary to have a decently sturdy tripod, but also you need to avoid any shake that can occur merely by pressing the shutter button!  To avoid this, you can use a remote shutter trigger attached to your camera, or what I do is set my camera to trigger the shutter 2 seconds (or 10seconds) after I press the shutter.   I think 2 seconds is adequate to give the camera time to "settle" before the exposure is taken.  One other point - if the lens you are using has "Image Stabilization" or "Vibration Reduction", turn it OFF.  I find that keeping it ON when using the shutter timer, or when using longer exposures,  can sometimes result in less than sharp images due to the nature of the Vibration Reduction.  It's really not needed since you are on a sturdy tripod, right?

To sum up, what I generally do is shoot in Aperture Priority, set ISO to its lowest setting, choose a fairly small aperture (f/16 or f/18) and if I'm in daylight, attach my filter.  I then put my camera in "live" mode - this mode displays the image in the display on the back of the camera in real time, and will display how the image will look when taken.  If it appears too dark, I'll open up the aperture a little (choose f/11) and see if it lightens the picture.  If too dark, I'll choose a smaller aperture.  I also want to see what shutter speed the camera is using - in aperture priority, this is the only setting that affects exposure that the camera will choose.  For a waterfall, which involves fast moving water, a shutter of 1/2 second may be sufficient to get the effect you're looking for.  For a standing body of water, or for waves, you may want to experiment with 30 second exposures.  The bottom line is to set, shoot and review and see if you're getting the image that you want!  Let me know if this has been helpful, or if there is something you may like added!

Here are a few more examples of longer shutter speeds and the effects you can get with them,,, 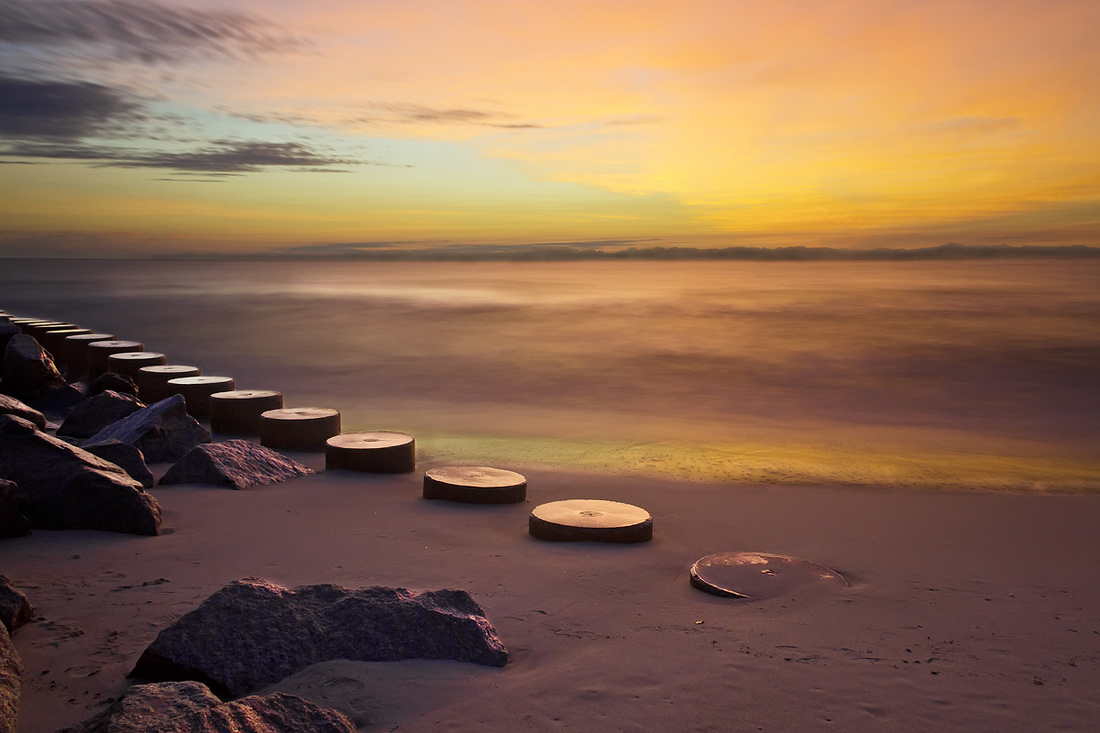 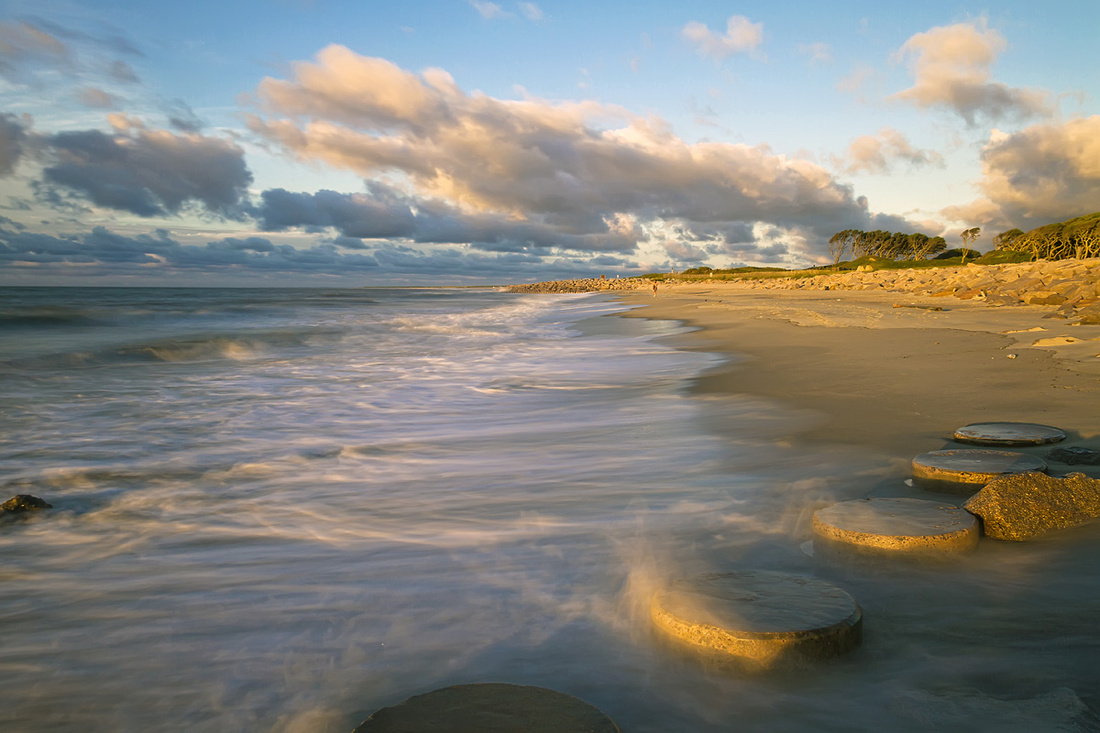 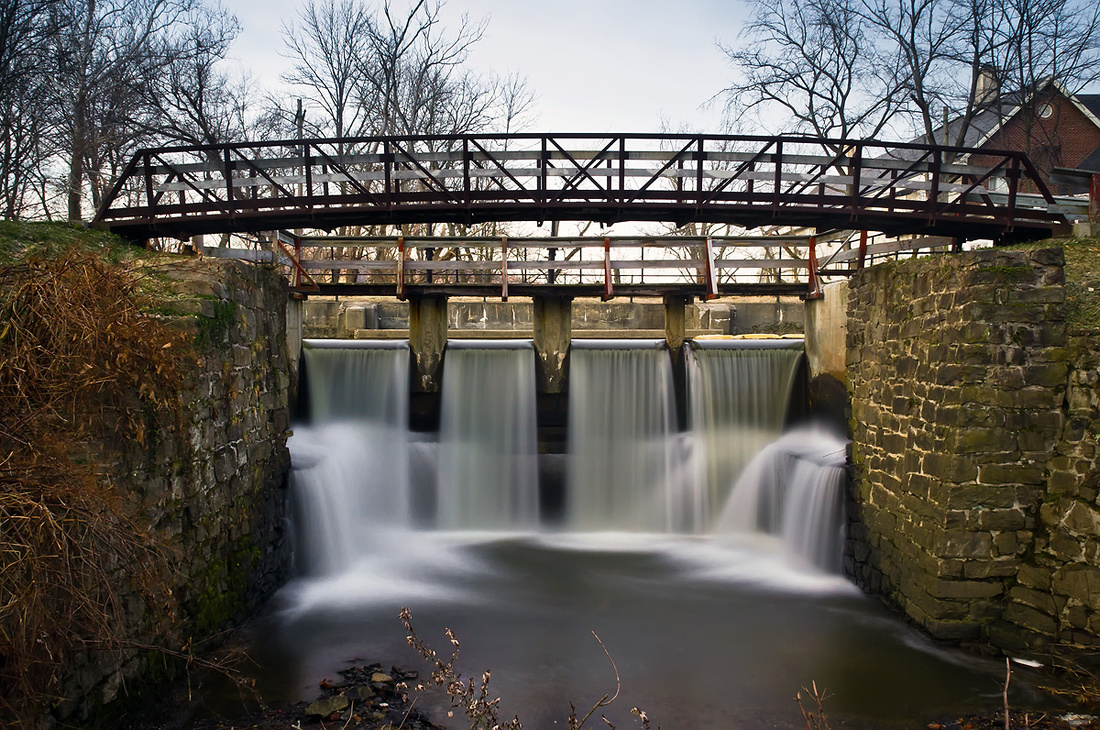 Bridge along the canal in Lambertville, NJ