How I Capture Birds in Flight (BIF)

First,  let me say that I am far from an expert on this genre of photography.  But since I first started concentrating on capturing bird images and birds in flight, my interest has grown steadily and I believe my images have improved.   So, the following describes some of the settings and techniques that I use to maximize the "keepers" that I get.  Keep in mind that other people may be successful using slightly different techniques, but if you've never done this before, this should help you to get started.  Feel free to check out some of my other images of various birds, some in flight! Black Skimmer with MealFlying back to feed its young

I am going to assume that most reading this will realize that you will need a DSLR for capturing these images, a point and shoot is just too slow in focus for capturing fast moving objects, at least with any regularity.  So the following are the equipment, settings and techniques that I currently use for most my outings. 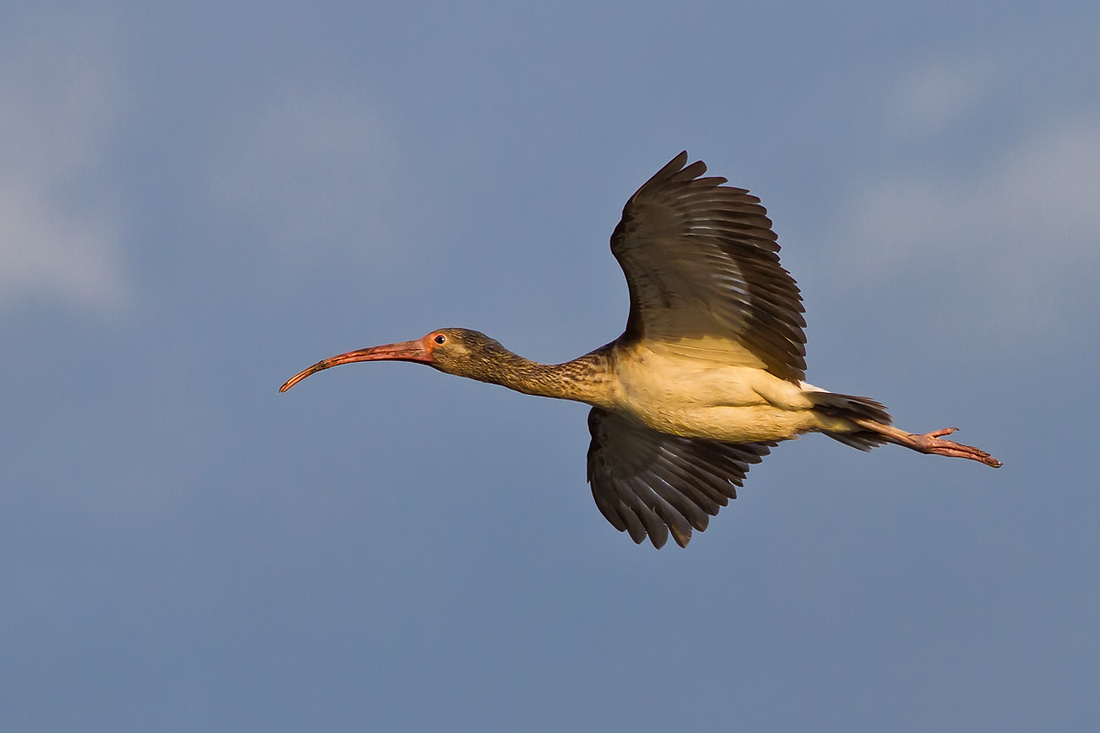 Equipment:  I use a Canon 7D, which is a cropped sensor camera.  My current longest lens is the Canon 300 f/4 IS prime lens which is very sharp.  I sometimes use a Canon 1.4 TC, depending on the light, and how close (or far) I think I may be able to get to the subjects.  BIF is one type of photography where a full framed DSLR is not necessarily an advantage.  With a cropped sensor camera, you are actually getting MORE pixels on the bird since you can take advantage of the "reach" due to the 1.6 focal length factor.

Settings:  I almost always use Aperture Priority when shooting flying birds.  I generally set my aperture maybe one stop above it's maximum (f/5.6 on my f/4 lens) but it can vary depending on the light, and also how big/small the bird is and how much of it I want in focus.  Generally I want all of the bird in focus, but that's not always possible, especially for birds with very large wing spans.  I will then adjust the ISO so that I will get a shutter speed of AT LEAST 1/1600 of a second.  I prefer to shoot above 1/2000.  So as you can see, good light is essential,  especially if you don't want to increase your ISO too much and introduce noise.

As far as metering goes, I usually set my camera to use Evaluative metering, which is the general all-purpose metering mode.  Depending on light, and the color of the bird and background, it is often necessary to apply either negative or positive exposure compensation to your settings!  Your camera's meter is designed to want to expose your images to 18% grey, which is great for an all purpose scene with some area in the foreground being dark and some area in the sky being bright, and some areas being just right.  The meter works great for most "average" scenes.   But have you ever noticed that when many people take pictures after a recent snowstorm, the snow looks very grey and dingy?  That's because the scene is mostly bright, and the camera is fooled into thinking that it's just an average scene.  So what the meter does is it compensates for this very bright scene by UNDEREXPOSING the picture!  This is why it's imperative to manually apply POSITIVE exposure compensation for a scene like this.  It seems counter-intuitive to apply +EV to a brightly lit scene, and -EV to a darkly lit scene, but you must manually compensate for the shortcomings of your meter!

Applying positive and negative EV for bird pictures (or any pictures) is also important.  As an example, if you are shooting a flying black vulture against a very bright blue or white-ish sky and don't apply any exposure compensation, you will basically end up with a dark bird with no detail.  You must apply positive exposure compensation in order to better expose the bird.

I am also going to experiment with Spot metering this week, to see how exposing strictly for the subject (bird) affects the outcome and if the exposures are better than guessing and experimenting how much exposure compensation to apply.  Checking and making adjustments as you go along are critical! Pigeon with straw in mouthBuilding a nest

Focus Method - I always use AI Servo focus (rather than one-shot focus), which allows the camera to constantly focus.  This is helpful with moving subjects like birds, but is also used in sports.

Focus Area - I have greater success using the "Center Point Expanded" focus area.  This means the camera will gain focus using the center focus point, but will RETAIN focus if the subject leaves the center focus point and falls to a point surrounding the center point.  Other Focus areas that I sometimes use (especially against an uncluttered sky) are Zone focus, which divides the focus screen into Zones and tracks subjects.  The disadvantage I find is that the camera decides which focus point to use within the particular zone.  This is usually not an issue when a bird is the only object in an otherwise uncluttered sky.  I find when shooting a bird against a wooded background or one with other objects, it's better if I can choose where the focus happens.  It's hard enough to attain focus in these conditions without having the camera decide to focus on a tree limb!

Advanced Settings -  Within the menu settings for the Canon are other tracking/focusing options that may be helpful depending on what you are shooting.  Many of these settings I have played with and changed to see what I prefer - you should too.  The one setting I think may be more important than some of the others, is the fAI Servo Tracking Sensitivity.  Others can be left at their default, unless you have a compelling reason/need to change.  I have changed some, but I wouldn't necessarily suggest doing this immediately when starting out.

AI Servo Tracking Sensitivity - There are 5 settings ranging from Slow to Fast - I have this set on Slow.  It really controls how sensitive the focus will be to another object entering the scene once you have already attained focus.  If you've attained focus on a bird and are panning on it and a tree limb comes between you and the bird, the camera will be more likely to get focus on the tree limb with this setting on Fast.

Techniques:  The Canon 300mm f/4 IS lens is really not all that big to handhold, so for capturing birds I rarely use a tripod with the 7D and this lens combo.  Many times when capturing images of birds, I do so while on a nature walk and am not actually staking out a particular site.  So, for my needs, handholding is best.  I also prefer to be between the subject and the sun. Of course this is not always possible but It's very important to get good light on the bird, especially the head and the eye.  Things like head angle and wing position also matter, but a lot of that is determined when editing through your many captures and deciding which shot is better than another.  In other words, don't hesitate to shoot a flying bird just because it's head angle is a few degrees from optimal!

One last technique that I use is something called "Back Button Focus".  Most DSLRs have the ability to re-assign buttons to other functions or to custom functions.  I and many other people who shoot BIF have elected to remove the focus function from the button that controls the shutter and meter and  assign it to a button on the back of the camera to be controlled with the thumb.   There are some photographers who don't find a real advantage in doing this, but I can say  that my "keeper" rate for in-focus shots for birds has improved with this technique.  I also like the fact that the focusing is not tied into the metering.  I can constant focus and re-focus using the back button, and only meter and activate the shutter when pressing the shutter button.  One big disadvantage of doing this that when you turn your camera over to a friend to take a picture of you in your surroundings is that you will always be OOF, because you will forget to tell your friend that the shutter button no longer controls the focus!

Please let me know if this post was at all helpful, or if you have any questions or comments! 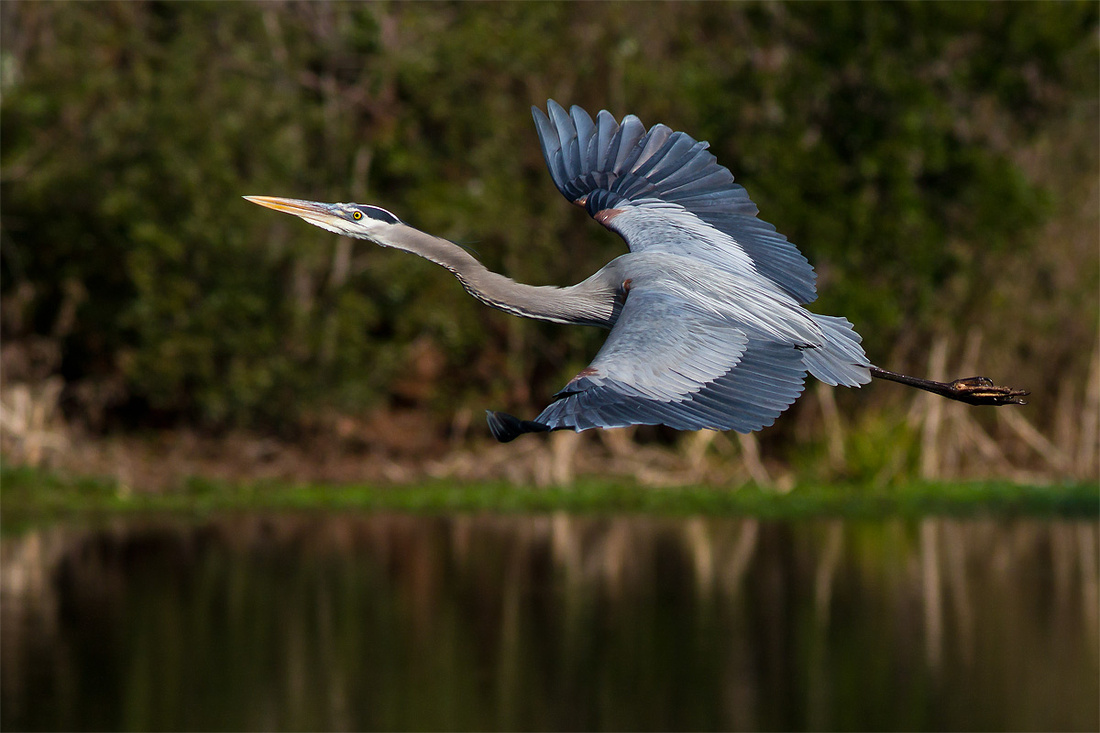 Donna Kruszewski(non-registered)
Very informative Kevin. Thank you for sharing your knowledge and photos. Both are priceless.
Diane(non-registered)
Thank you for posting the useful information and sharing your experiences. I will study the blog and then practice, practice, practice! Thanks too for taking time to send the emails. Enjoy your photos, just stunning!
David(non-registered)
I enjoyed it , I found it very useful and loved the images here . Thank you for taking the time to help us just starting .
No comments posted.
Loading...
Subscribe
RSS
Recent Posts
How to Shoot Longer Exposures During Daylight How to Become a Better Photographer INSTANTLY! Simple Composite using Photoshop Elements How I Capture Birds in Flight (BIF)
Keywords
bird birds flight
Archive
January February March April May June July August September October November December
© Kevin Giannini Photography
Powered by ZENFOLIO User Agreement
Cancel
Continue